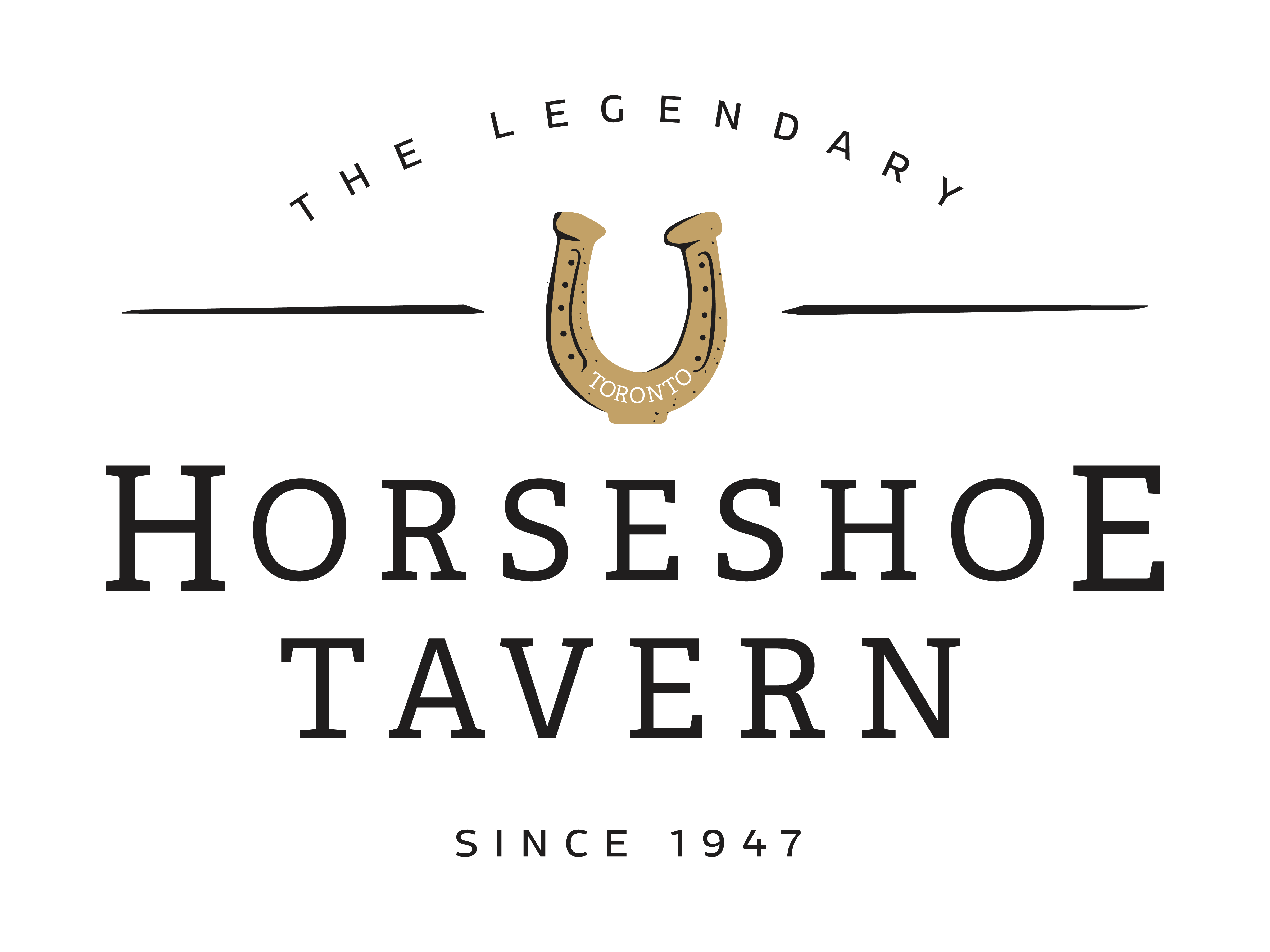 The Horseshoe Tavern, located in Toronto’s Queen West neighbourhood has been a Canadian musical institution since it opened its doors in 1947.  The front patio (season dependant) and front bar is open 7 days a week, with live music and events in the back bar.

In its early days the venue was a neighborhood bar and restaurant that had a reputation as a rough place, as it became a go to place for local bike gangs and having famed bank robber Edwin Alonzo Boyd as a regular patron.

For whatever it also became a hangout for recently arrived Maritimers and Newfoundlanders who continually pestered Starr to build a stage and let some of the regulars perform. Their spontaneous tavern kitchen parties were the genesis of today's Legendary Horseshoe Tavern. 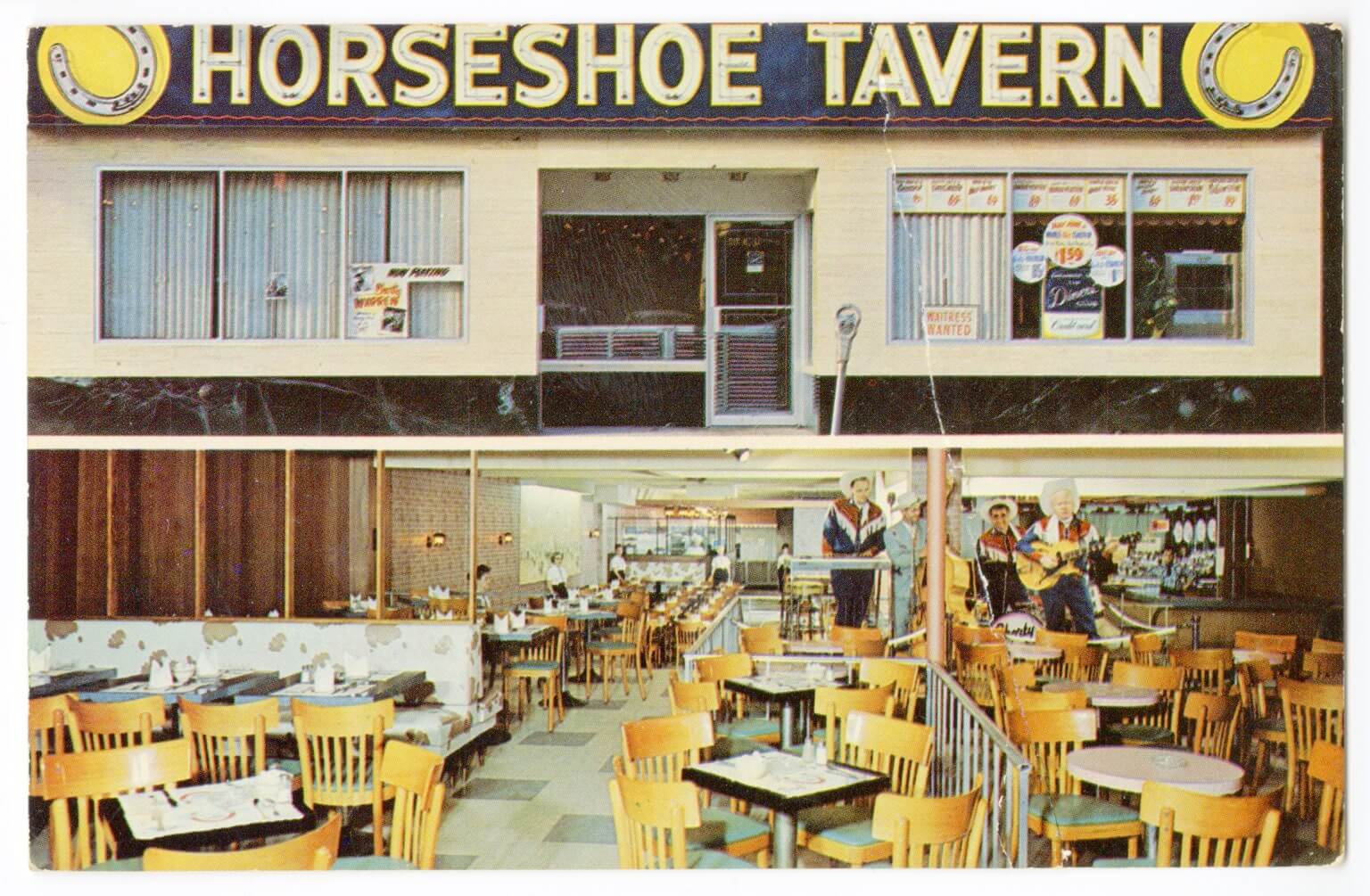 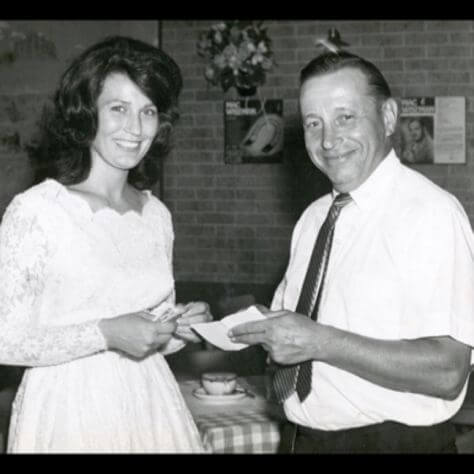 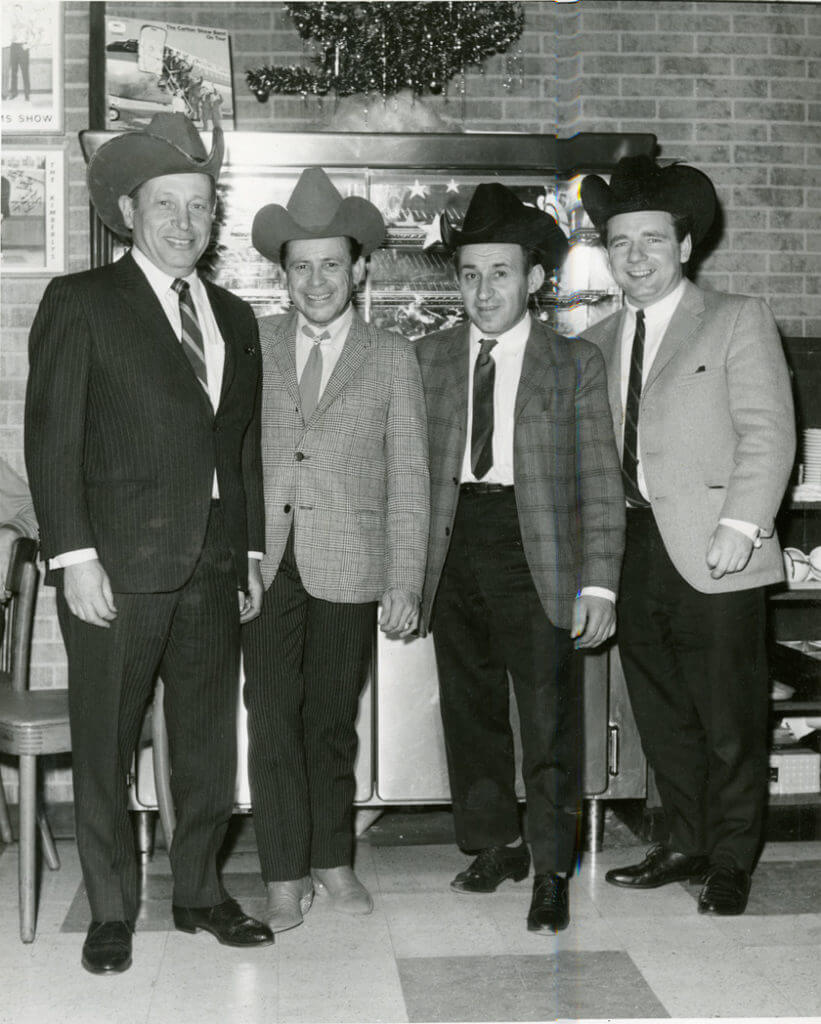 Starr instantly became known as the friendliest and most dedicated small club owner in Canada, often letting touring artists stay overnight in his own home. While Nashville’s country music artists made the venue famous, it was Starr’s dedication to the development of national and local Canadian acts that fueled its day-to-day success.

One of the venue’s most popular Canadian performers was Stompin’ Tom Connors. 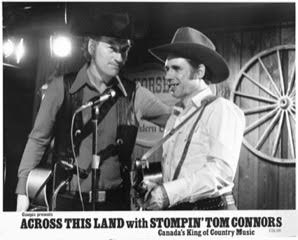 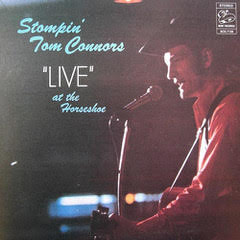 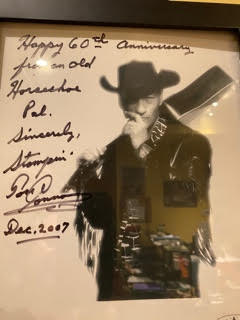 Many artists played the venue for consecutive nights, typically Tuesday to Saturday, 3-4 sets a night, but Stompin’ Tom Connors held the record by playing sold out shows at the Horseshoe for 9 straight weeks. It was this long residency that essentially established Tom as a Canadian icon. Spompin' Tom enjoyed playing the venue so much that in 1970 he recorded his first live album Stompin’ Tom Connors - Live at The Horseshoe.
During this period local artists like The Band, Bruce Cockburn, and the Good Brothers, played the venue regularly.
1976-1982

The Gary’s Last Pogo, and Bankruptcy

Jack Starr retired a few times in the early to mid 1970's, and for the last time in 1977. While remaining the landlord, he attempted to find the next generation of owners and bookers. It was during this time that local indie new wave and punk promoters Gary Cormier and Gary Topp (“The Garys”) came on board. They introduced a whole era of modern music to the venue, Toronto, and the country, bringing in artists like the Police, Talking Heads, Dictators, Suicide, The Cramps, MC-5, Dead Boys, and The Stranglers, and nurturing a local scene with emerging Ontario talents like the Diodes, Viletones, Demics, Forgotten Rebels, and Teenage Head. 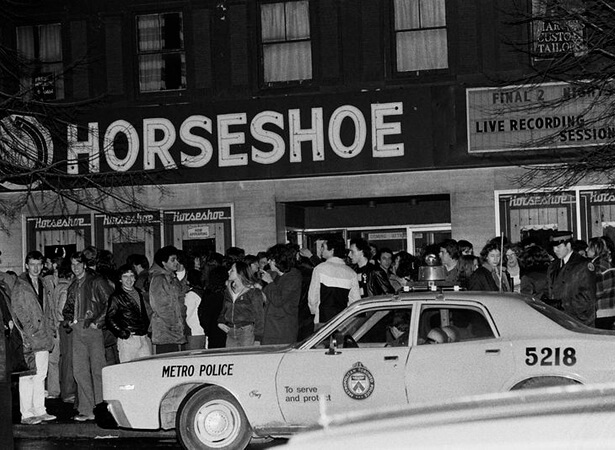 Though the Garys paid homage to North American roots music through their alternative punk programming, the bulk of their music vision was ahead of its time.  Their music programming brought with it what was at the time an unusual clientele and landlord Starr insisted on more performances by Canadian country music artists. In 1978, the Garys hosted a going-away party that ended an era. “The last punk rock concert in Toronto” featuring The Mods, Viletones, Scenics, The Ugly, Cardboard Brains, and Teenage Head.  Within a few hours the concert was shut down by the police and a riot ensued on Queen St West that almost destroyed the building. The night was captured on film by Colin Brunton, who later turned his film into a documentary called “And Now Live from Toronto - The Last Pogo”. 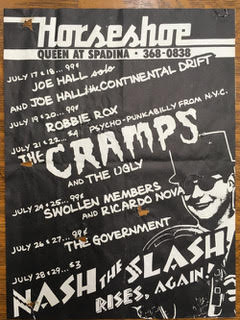 While the Garys went on to become Toronto’s leading progressive indie promoters, the venue and the building remained unoccupied. Starr lent the venue to various prospective owners with musical visions but nothing succeeded. Eventually the building was divided into 3 retail spaces and The Horseshoe changed its name to Stagger Lee’s, a joint strip club and cover band venue.  The strip club didn’t last long.

Jack Starr came out of retirement in 1982 to operate the venue as a country bar. During this time he met Kenny Sprackman (who had recently run the Hotel Isabella) when he answered Jack's ad for a driver to transport his car to his snowbird Florida residence. The pair hit it off, and Jack matched Kenny with Kingston, Ontario resident Michael (X-Ray) Macrae, who had been bugging Jack to allow him a shot at running the venue. X-Ray brought aboard his friends Dan Aykroyd, and Richard Crook, to help finance operations. The collaboration of these 4, not only saved the business but musically and historically defined what we now as call The Legendary Horseshoe Tavern. 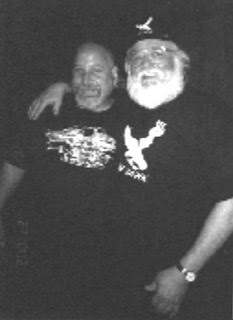 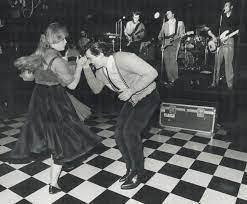 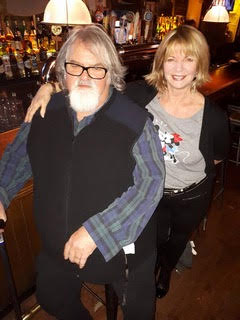 The venue’s floor plan was changed during these years. The stage was moved from the centre of the room to the back of the building splitting the space in two. The Horseshoe Tavern was now a local neighbourhood bar in the front with a concert venue in the back.

Talent buyers X-Ray and Derek Andrews booked up-and-coming bands like Blue Rodeo, Prairie Oyster, The Bopcats, Handsome Ned, and Leslie Spit Trio. Sprackman ran the bar, hiring employees like Bob Maynard, Teddy Furry, and Sue Carrington Baker. The Queen Street sound was born, a blend of Toronto roots music, country, blues, and alternative punk. Kenny Sprackman changed the way in which local bands were booked, adopting his Hotel Isabella model where the artist takes 100% of the door sales. The success of the Sprackman-X-Ray era re-established The Horseshoe as a legendary venue to hear live music and see rising local and Canadian national talent. Blue Rodeo even ran their independent label Risque Disque out of the basement of The Horseshoe Tavern. 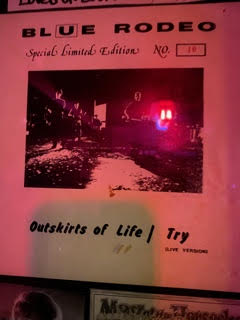 Queen Street Rocks – The Tragically Hip, Amanda Marshall, The Phantoms and The Skydiggers

In the late 1980’s X-Ray took over the booking and brought in new Canadian alternative rock artists like The Tragically Hip, The Watchmen, Pursuit Of Happiness, Amanda Marshall, The Bourbon Tabernacle Choir, The Phantoms, and The Skydiggers.

Under Kenny and X-Ray’s direction the Horseshoe Tavern continued to be a hit with its patrons. They hired new staff, often musicians like Joe Toole (Phantoms), and Sean Dean (Sadies).
‍
With continuous changes in the music industry, business was flat and more change were in the works. Kenny and X-Ray brought on Ultrasound booker Yvonne Matsell.  Yvonne introduced the venue to the new emerging rock and folk sounds of The Barenaked Ladies, The Waltons, Lowest of the Low, Furnace Face, One, Great Big Sea, and 13 Engines. 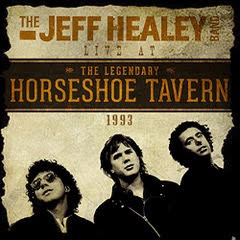 They introduced an artist development night to showcase emerging North American talent at The Horseshoe with their good friends Dave Bookman from Edge 102.1 (formerly CFNY) and promoter Elliott Lefko. Jeff and Craig convinced agents to book bands to play a free show on Tuesday nights. With their partnership with radio DJ Dave Bookman at Edge 102, bands would receive extra exposure. Shows on Tuesdays nights would have no cover and were called “Dave Bookman’s Nu Music Night”.

In 1998 Craig Laskey took over the booking of the Horseshoe Tavern, booking Canadian artists like Matt Mays, The Sadies, Blackie and the Rodeo Kings, The Deadly Snakes, and The Constantines. With touring bands like Jeff Tweedy, Son Volt, Jayhawks, and Neko Case playing the venue the Horseshoe had re-emerged as a popular music venue in the city with big artists like Blue Rodeo coming back to play. 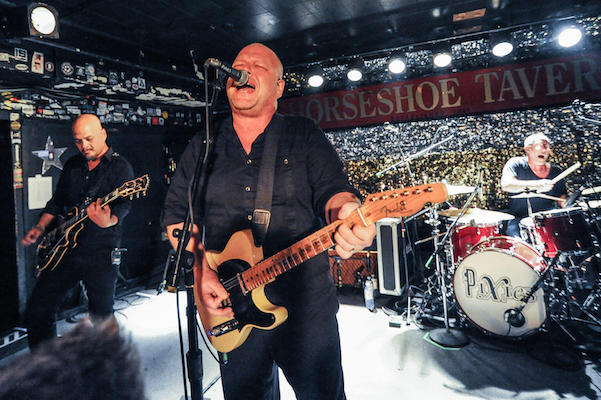 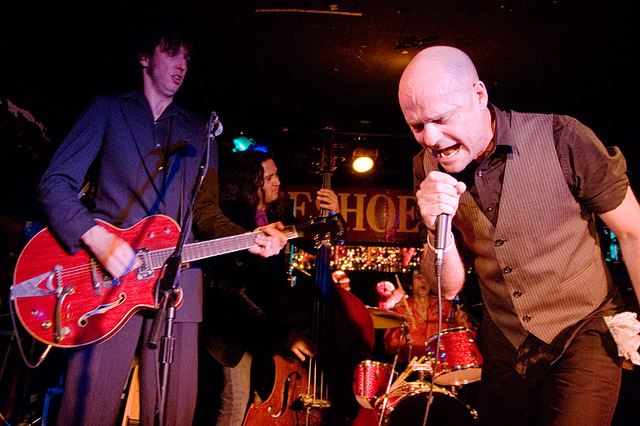 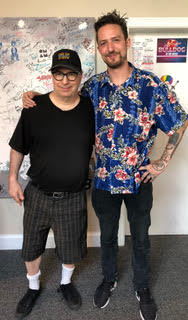 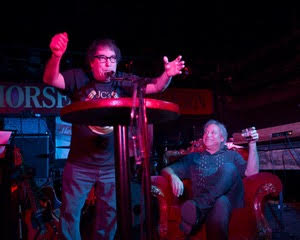 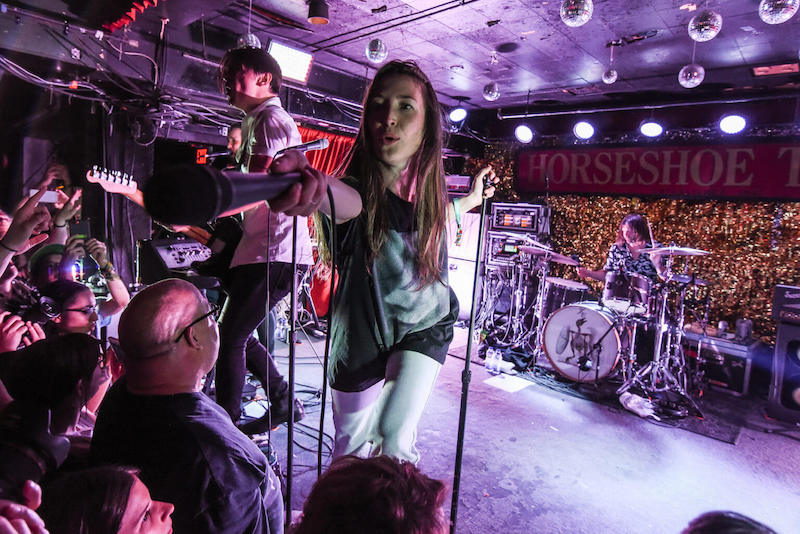 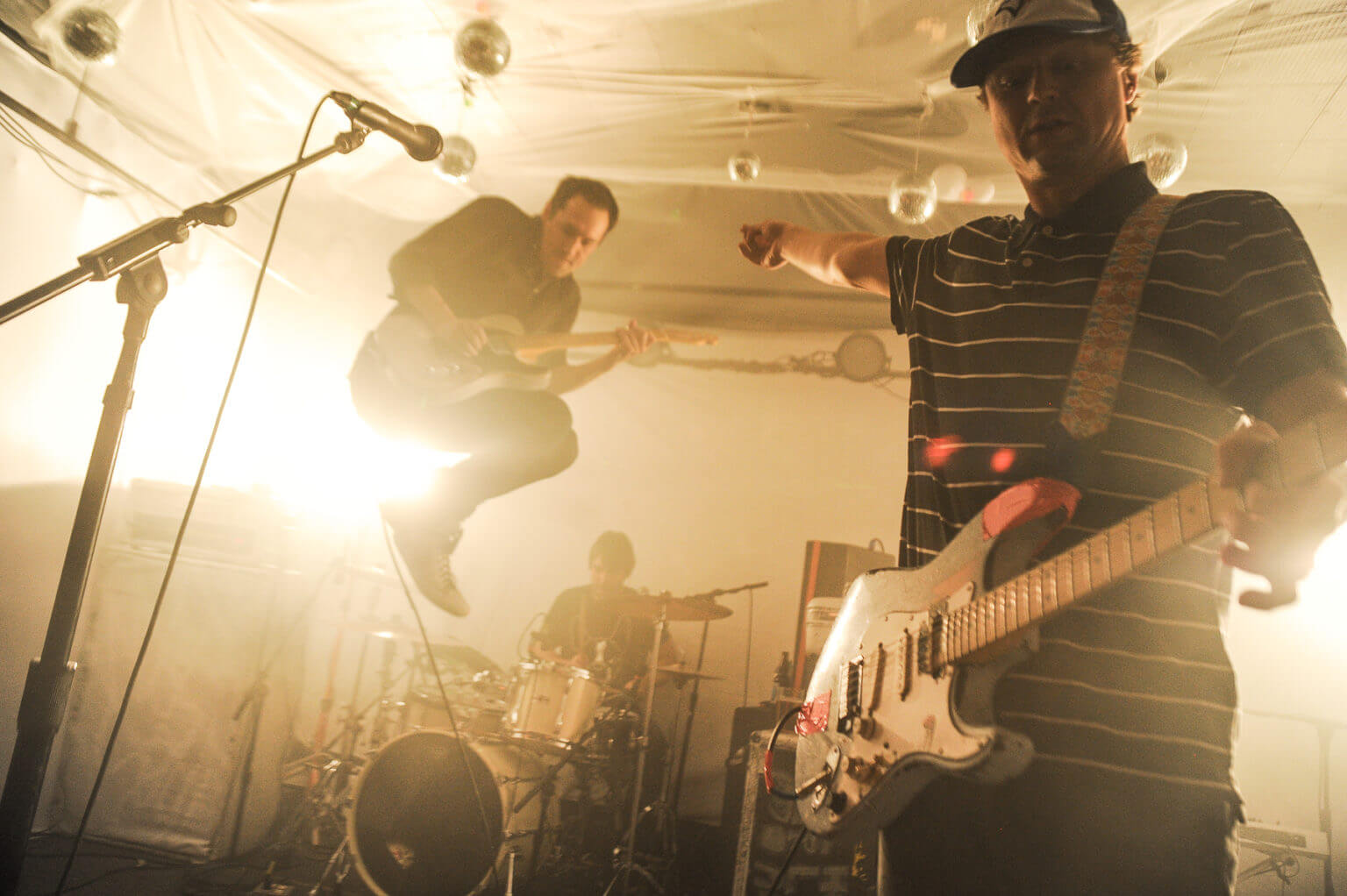 Hollerado
Bands of all genres and sizes play shows almost every night of the week, making the Horseshoe Tavern is as musically relevant as it has been in any era since its inception in 1947.  Check out our listings and come see your next favourite band. 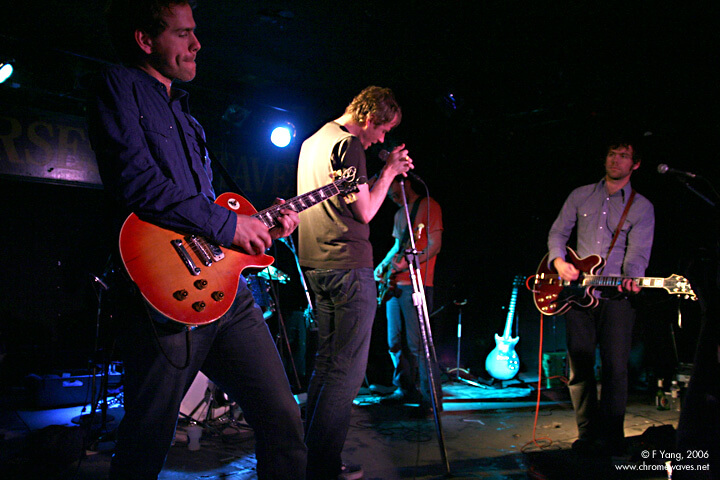 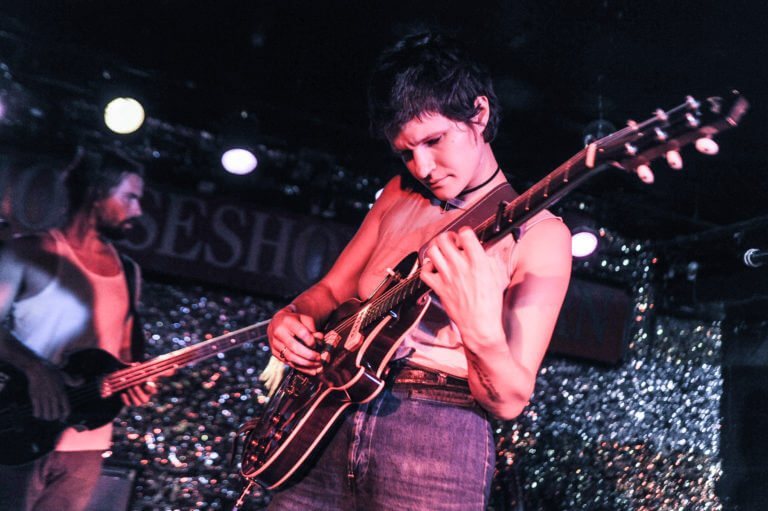 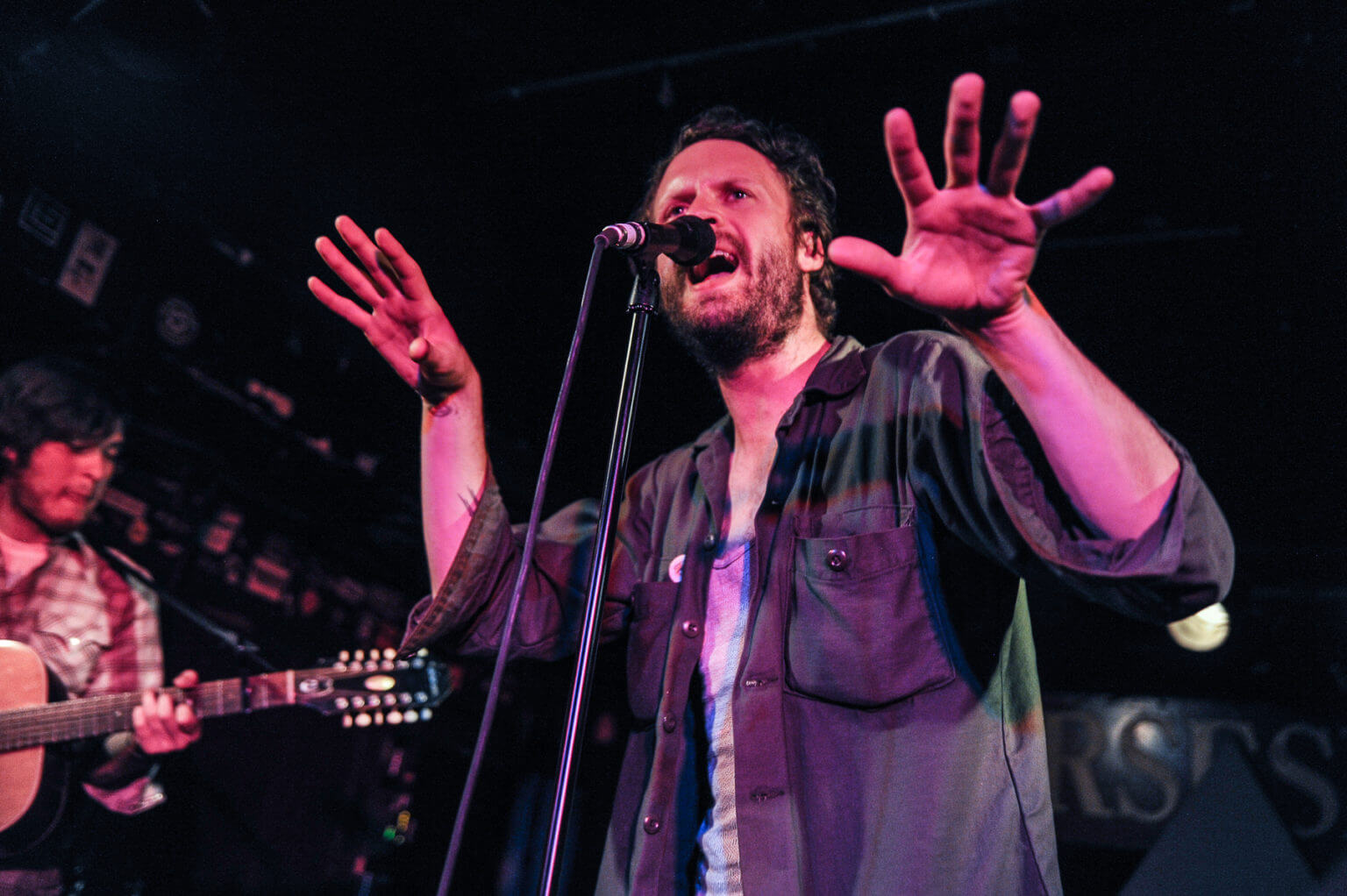 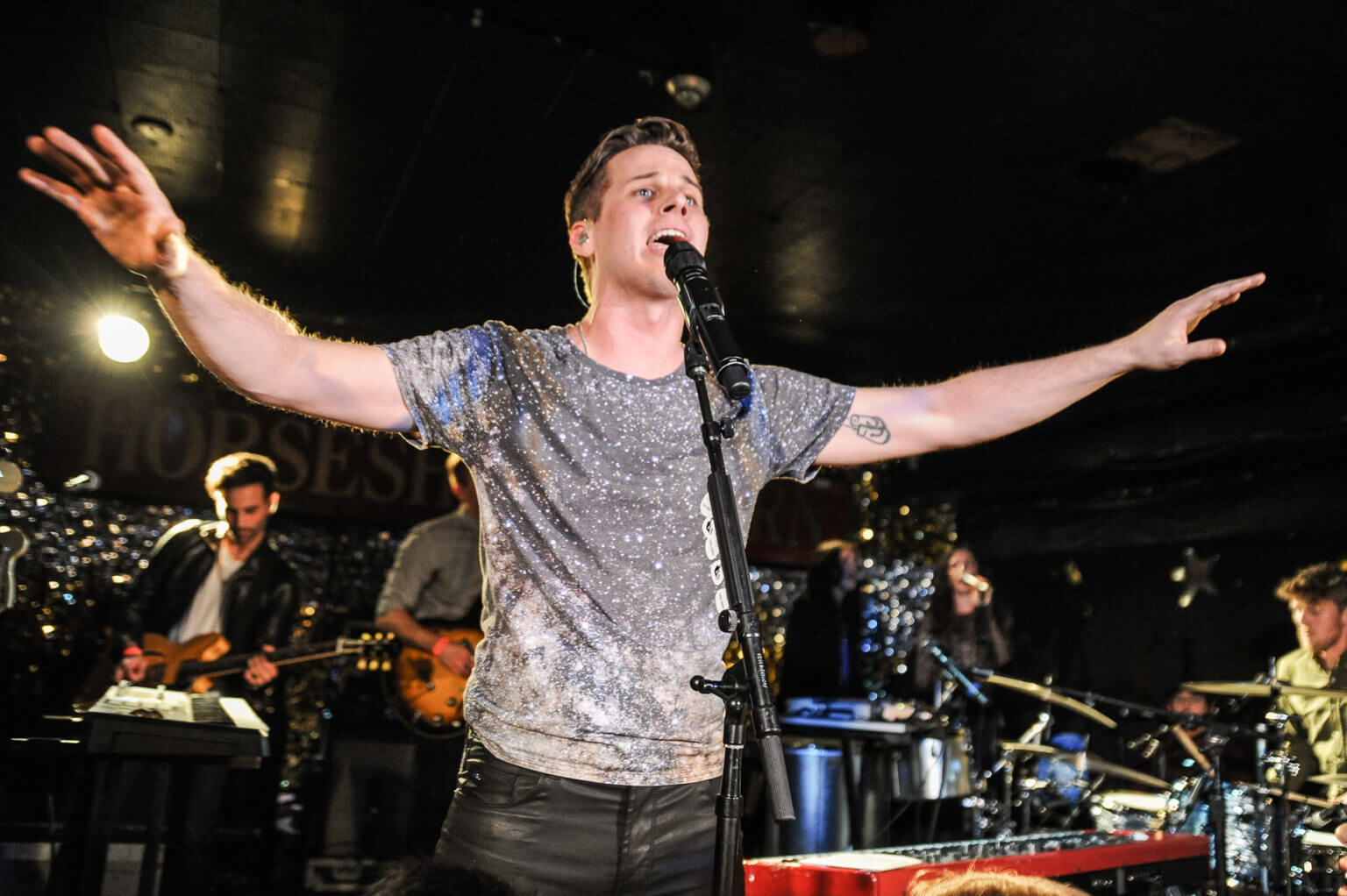 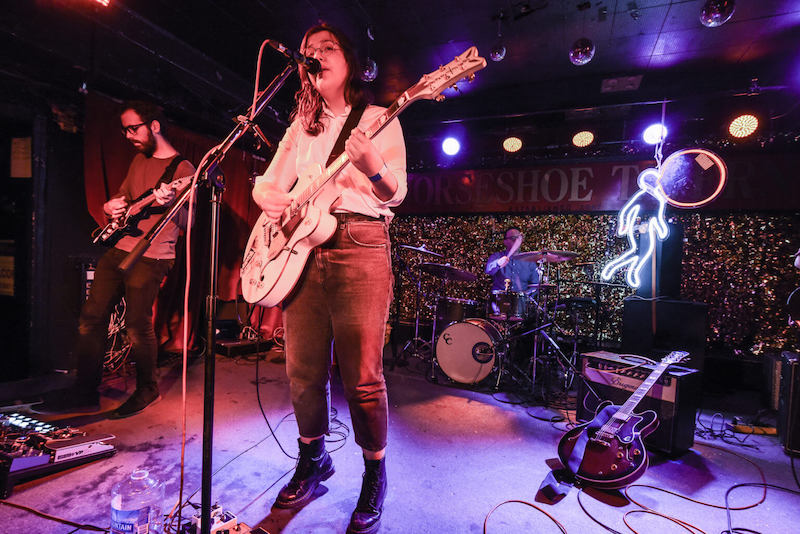 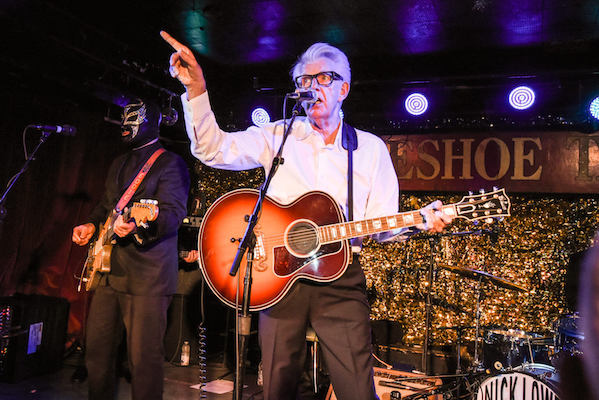 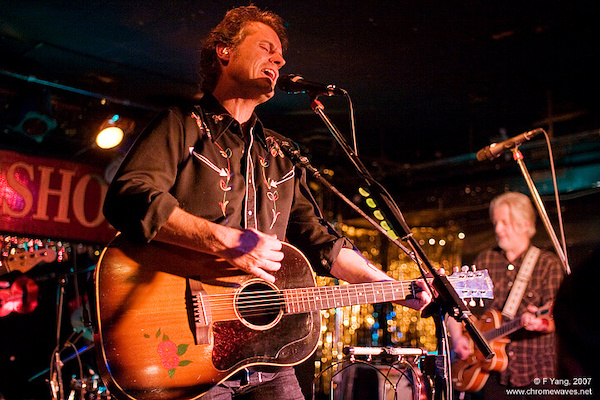 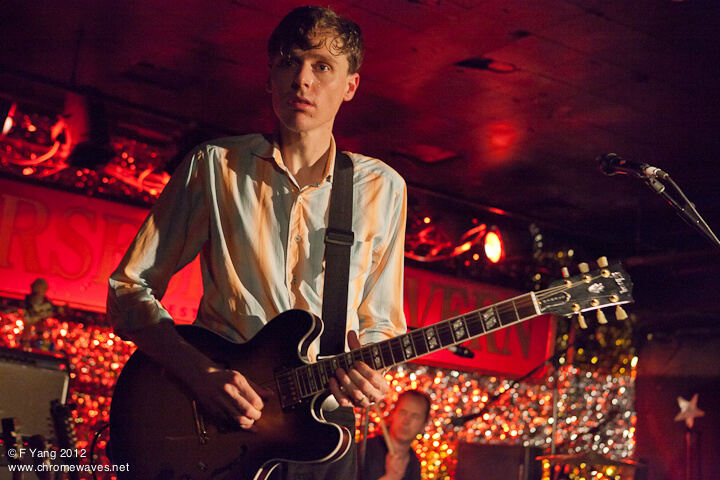 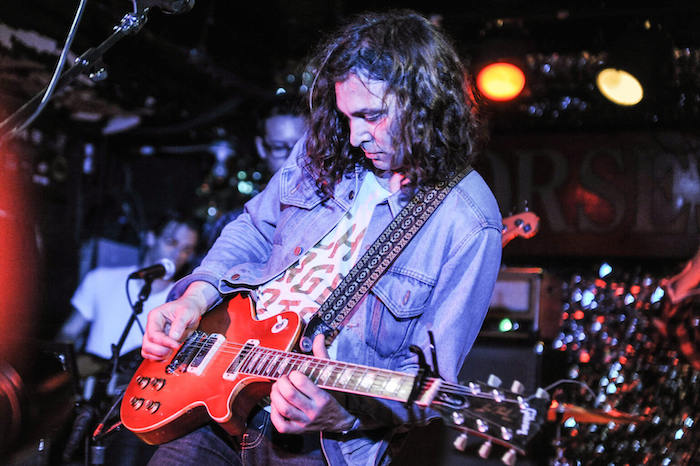 War on Drugs
All above live photos by Stephen McGill, except Gord Downie & The Sadies, The National, Jim Cuddy, and Joel Plaskett, which were taken by Frank Yang.